NEW Norfolk was once again in the news for all the wrong reasons today, when yet another fire took hold in one of the buildings on the former Royal Derwent Hospital/Willow Court Centre campus.

At the end of today, another building was being demolished after being rendered unsafe by a fire. As the New Norfolk Police pointed out earlier in the day, fires like this do not light themselves in abandoned buildings with no services connected.

The fire was in the news all day, leading mainstream media sites as well as social media. The incident was also among the top items in all three TV news bulletins tonight. It was the second fire in the building in two days, with the other being doused around 5pm on Wednesday. 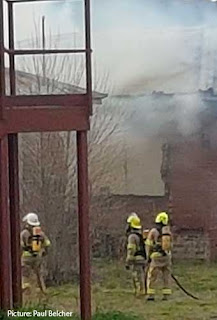 Reported at about 11.55 this morning, the fire was in the building once known as Glenora House or G Ward. It once formed part of the semi-circle of four 1930s-40s buildings at the side of the old Royal Derwent Hospital sportsground, until the old Franklin House/Ward F fell victim to an arson attack in 2012.

Despite being so close to both The Avenue and the adjoining Woolworths supermarket, the former "oval buildings" - now reduced to just Wards D and E - are the subject of daily trespassing and the lighting of frequent fires, two of which have now resulted in the total destruction of buildings.

About 10 crews responded from several local fire brigades today, as well as further afield, including the aerial platform or "snorkel" unit from Hobart. A Tasmania Fire Service patrol remains on the scene tonight to watch over the smouldering remains of the heritage-listed building.

The fire produced a plume of smoke that was seen throughout New Norfolk and beyond. It was such that it required the fire service to issue a smoke alert for the town.

Social media users and people on the scene were quick to point the finger at certain suspects and by mid-afternoon Tasmania Police said two people were in custody in relation to the fire, having been arrested in a car park nearby.

Inspector George Cretu attended the scene and asked that anyone who saw people acting suspiciously in the area make contact with the police by calling 131 444 or Crime Stoppers anonymously on 1800 333 000.

Anonymous reports can also be made online at www.crimestopperstas.com.au
Most onlookers kept their distance and watched from The Avenue or from the Woolworths car park, but even while the fire was being fought and the police were doing their investigating, other people took it upon themselves to enter Wards D and E to climb to the upper floor to obtain better photos to post to their social media accounts. Still others clambered up the external fire escape on Ward E for the same purpose, ignoring both the "keep out" signs and the obvious danger to themselves.