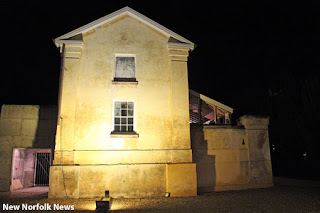 AFTER three years of assessments and deliberations, the Australian Heritage Council seems to have decided against including Willow Court on the National Heritage List.

"Advice has been received from the Federal Minister for Environment and Energy advising that the nomination of Willow Court Barracks Precinct and Frascati House to the National Heritage List in 2015 has been unsuccessful," Derwent Valley Council general manager Greg Winton says in his senior management report to next week's council meeting.

The rejection of the 192-year-old convict hospital site in central New Norfolk contrasts with the enthusiastic support of the former minister responsible, Greg Hunt MHR, who visited the site in 2014 and later announced that it would be assessed by the Australian Heritage Council for possible inclusion on the National Heritage List.

The Derwent Valley Council spent about $15,000 preparing the nomination, which was submitted early in 2015 and met with early success when it was accepted for formal assessment.

Minister Hunt expressed his support at the time, saying: "It’s a very impressive place and an important part of our history.” He went on: "I am delighted the Willow Court Barracks Precinct and Frascati House will be included on the Australian Heritage Council’s work plan,” Minister Hunt said, adding this was "the first step towards possible national heritage recognition of this important site of our early colonial history."

Officers of the Department of Environment visited New Norfolk in 2015 and 2016 to inspect the site and gather information for the assessment.

The National Heritage List was established in 2003 and contains 113 natural, historic and indigenous places of outstanding national heritage value. There are 13 listed places in Tasmania:


In July 2017 it was announced that the assessment period for Willow Court had been extended by two years to June 30, 2019. Mr Winton's report in the Derwent Valley Council meeting agenda suggests a decision has been reached earlier than expected although nothing has yet been announced on the Department of Environment's website.

The former Federal Member for Lyons, Eric Hutchinson, was a supporter of the nomination and said it would open Willow Court to sources of federal funding which it has so far been unable to attract.

Mr Winton has advised councillors that 15 pages of advice on the National Heritage Council's decision not to recognise Willow Court was being assessed, with further information to be provided to the council and relevant committees in due course.