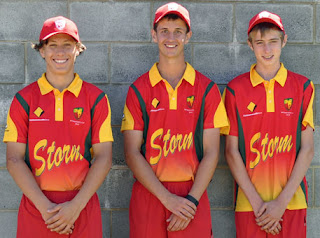 WHEN it comes to up and coming cricket talent, the Derwent Valley has it in spades.

The team played in two 50-over matches and two Twenty20 matches, winning three of the four before defeating the Cricket Tasmania XI by a massive 132 runs on Thursday. This was a 50-over match reduced to 40 due to a wet pitch and surrounds. All three boys played very well and should be proud of themselves.

Ryan Banks-Smith showed he is a batsman of the future, scoring a total of 108 runs and an excellent top score of 40.

Blake Mayne, playing on turf for the first time, put in a very good performance with best bowling figures of 2-9.

Jack Stevenson was praised for his leadership as captain of the team. He took six wickets with best figures of 3-22 and made 35 runs with a top score of 16.

A squad of 16 boys has now been picked from the four sides that competed in the cup and will play in a carnival in Hobart at the end of this month. Congratulations to Jack Stevenson and Ryan Banks-Smith who made that squad. All the best boys and let's hope you both do well and make the State Under 15 team to go to Brisbane in February.