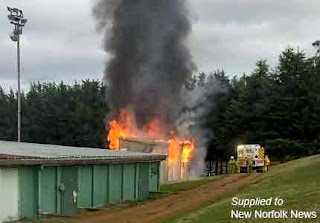 THE press box at Boyer Oval has gone up in a spectacular fire that could be seen from many parts of New Norfolk about an hour ago.

The fire was first reported at 10.18am and the fireball was seen by many people from the opposite side of the river.

There are reports that minor damage has been done to the grandstand next to the press box, which was used by match-day commentators and timekeepers as well as for some storage.