Corumbene plans for the future

A SUCCESSFUL year at the Corumbene Nursing Home was reported to last night's annual general meeting by president Peter Rouleston, despite a small operating loss. Of particular interest in Mr Rouleston's report was news of a master plan for further development of the home with seven stages to be implemented over the next 10 years.

"Stage 1 of the master plan is due to commence in late 2010/early 2011 and comprises a new block of 12 residential rooms, with eight of them to be fitted out in Stage 1 with the addition of a lounge/dining room," Mr Rouleston said in his report. "Additional features of Stage 1 include a new laundry, a new staff room and four new car spaces."

When complete, the Corumbene complex will have an additional 28 resident rooms and 22 independent living units with care on-call. The development will be contained within the existing area owned by Corumbene in Lower Rd, New Norfolk.

Mr Rouleston also announced the retirement of his predecessor and long-serving board member Alan Pearson. "Alan has been a member of the Corumbene Board of Management for 13 years, of which almost nine years he held the office of president. He leaves his position with our grateful thanks for his dedication and the contribution he has made towards the long-term viability of Corumbene," Mr Rouleston said.
Posted by Ed at 10:04 PM No comments: Links to this post

ORGANISERS of the next Willow Court open days have announced that the dates have changed to November 27 and 28 to coincide with the Lachlan Festival being held on November 28. The Willow Court & Barracks Working Group hopes to have more wards open for inspection than on the last open days earlier this year.
Posted by Ed at 10:15 PM No comments: Links to this post

NEW Norfolk's near complete dominance of the Southern Football League was cemented yesterday when the Eagles won their second premiership in a row. Writing in today's issue of the Sunday Tasmanian, reporter Adam Smith says the emphatic 72-point victory over Dodges Ferry meant New Norfolk had won 40 of its last 41 matches. Read more here.
Posted by Ed at 3:56 PM No comments: Links to this post 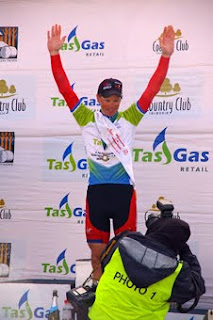 BALLARAT cyclist Patrick Shaw, 24, was first across the line this afternoon in the second annual Launceston to New Norfolk Classic. He was congratulated by Derwent Valley Mayor Martyn Evans, who presented medals to the winner and placegetters. Shaw also won the "King of Poatina" title.

With a respectable time of 5 hours, 30 minutes and 25 seconds, Shaw had a narrow win over breakaway partners Chris Jory, of New South Wales, and New Zealander Eliot Crowther. Jory took the sprint award.

Some 61 riders started the classic at the Country Club Casino but only  27 pedalled into New Norfolk to complete the race, founded only last year as a replacement event for the 82-year-old Launceston to Hobart Classic.

“It’s one of the best bike races in Australia,” Shaw exclaimed after crossing the line. “The course is so tough.” Shaw, who competed in Europe for the last two years and contemplated retirement upon his return to Australia in January, is enjoying a remarkable domestic season.“This is so exciting for me. To win a race like this really is special.”

The stumbling block to most riders in the classic was the 10km climb up the 1052- metre Poatina mountain which came only 59kms into the race. Shaw and a small breakaway group of Jory, and New Zealanders Crowther, Shem Rogers and Jason Christie were more than seven minutes clear of their rivals at the top of the mountain and, with the exception of Christie who finished ninth, that’s where they stayed.

Posted by Ed at 4:37 PM No comments: Links to this post

SIXTY cyclists including teams from New Zealand and Malaysia will tackle the 208km Launceston to New Norfolk Classic tomorrow (Tuesday). There will be 20 Tasmanians in the field, along with riders from Victoria, New South Wales, South Australia, Queensland and Western Australia.

A repeat of last year's dismal weather will not worry Ballarat cyclist Patrick Shaw: “If it’s filthy, dirty weather, I am used to it,” Shaw, 24, said. He continued: “Launceston to New Norfolk is an exciting race, very tough, but a few of those young fellows from New Zealand can really climb,” he said. “They won’t be bothered by cold and rainy weather either.”

Shaw predicts his team-mate Ben Dyball, of NSW, may cause an upset. “Ben will go up over Poatina a minute-and-a-half faster than anybody in Australia,” he said. “If he can find his climbing legs he’ll be tough to beat."

Semi-final win for the Eagles

A DISCO for young people aged 12-18 will be held at the Westerway Community Hall on September 17 from 7-11pm. Admission will cost $2, and free buses will run from Ouse and Maydena (see below). Entertainment will be provided by DJ Dave. For more information contact Derwent Valley Council youth participation officer Matthew Hill on 6261 8511.

ORGANISERS and competitors will be hoping for kinder weather than last year when the 2nd Launceston to New Norfolk Classic takes place on Tuesday week (September 14). Appalling weather all but washed-out last year's debut event, with only a hardy few cyclists making it through to New Norfolk.

Described as Australia's most spectacular and challenging one-day bike race, the event starts at the Launceston Country Club Casino at 9am, making its way to New Norfolk via Poatina and Bothwell for an anticipated 2.30pm finish in Circle St. Total prize money of $6000 is on offer for the 208.2km race. There will be a massed start, embracing A, B and C Grades plus a special 20-and-under section. There will be 13 sprints and seven hill climbs including the King of Poatina, a Category 1 climb with special prizemoney.

All riders who complete the course within a 90 minute cut-off from the race-winning time will be awarded a specially-struck medal from the major sponsor, Tas Gas. Other sponsors include the Derwent Valley Council, New Norfolk Business Alliance, Country Club Casino and Derrico Cycles. Entries close September 5 at www.tas.cycling.org.au More information about the race can be found at http://www.caribou.net.au/launceston_hobart.html
Posted by Ed at 6:24 PM No comments: Links to this post

Email ThisBlogThis!Share to TwitterShare to FacebookShare to Pinterest
SINCE 2002, the Material Girl arts award and exhibition has been celebrating and promoting the work of Tasmanian female artists. Managed by Tasmanian Regional Arts, the theme for 2010 Material Girl is "Succulence" and the exhibition will be hosted at the New Norfolk Courthouse Gallery from September 24 to October 11. The theme has inspired responses from many angles with ideas involving food, sexuality and nurturing represented in painting, ceramics, textiles and sculpture; while a couple of entrants also chose to interpret the word “succulent” as the plant form with surprising twists. As in previous years, Tasmanian Regional Arts will tour a selection of works around the state. In keeping with Material Girl’s support for young and emerging women artists, the 2010 “Succulence” logo artwork was designed by Ashlee Griffiths of Port Sorell.

The Material Girl exhibition will coincide with the New Norfolk Courthouse Gallery's spring re-opening. The subsequent exhibition will be Creative Well, from October 1-25, in conjunction with Seniors Week. 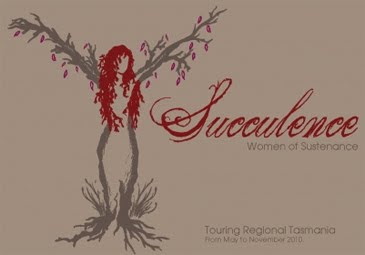 Posted by Ed at 5:55 PM No comments: Links to this post