THE long-awaited community forum on the subject of the stalled redevelopment of the Willow Court historic site will be held this week. The function will be held at 7pm on Thursday in the social rooms behind the Derwent Valley Council Chambers in Circle St, New Norfolk.
Posted by Ed at 7:22 PM 2 comments: Links to this post

ABC Radio news is today reporting that the State Government has asked the Derwent Valley Council to return $750,000 it was given four years ago towards the redevelopment of the Willow Court historic site. This follows similar action by the Federal Government and brings the tally of lost redevelopment funds to $1.5 million.

The council has been involved in a lengthy dispute with the Federal Government over its decision to withdraw funding for the project, even going so far as to launch a legal action which it quickly cancelled in the face of escalating costs. When questioned about the legal action, the council refused to comment - despite the matter being on public record on the Federal Court website. It is not known how much money was spent on the aborted legal action.

It is understood the council has sought legal advice on the State Government's decision, and will be briefed by a lawyer at a closed council meeting this Tuesday night. Comment is welcome from the council and government on this matter.
Posted by Ed at 10:30 AM 6 comments: Links to this post

MAYOR Tony Nicholson came under fire at tonight's Derwent Valley Council meeting, when two councillors alleged he had not informed them of legal action against the council.

Rising to his feet during questions without notice, Councillor Martyn Evans said he had recently been advised that a writ had been issued against the council, Valley Vision, and the former council-owned company Derwent Valley Investments. Cr Evans asked whether those councillors not implicated in the action should seek independent legal advice, and Mayor Nicholson said he would take the question on notice.

A short time later, Deputy Mayor Scott Shaw said he had recently been handed legal documents while shopping in the Woolworths supermarket at New Norfolk, and told that the council was under writ in the Supreme Court. "Why have you as mayor not kept us informed of this?" Cr Shaw asked. In reply, Cr Nicholson said he had only the same information as Cr Shaw.

Cr Evans interjected to say the writ had been filed on March 31, which was "adequate time" for the mayor to have advised councillors. General manager Stephen Mackey said: "We are dealing with it," and Cr Nicholson said he would address the matter after the meeting.
Posted by Ed at 9:23 PM 5 comments: Links to this post

Councillor Nicholson had called councillors back to the council table some time after declaring the meeting closed. After being asked to leave, Mr Bester asked the mayor what section of the Local Government Act applied to the new meeting. Cr Nicholson said it was a private meeting and again asked the three people to leave. While the Bushy Park residents took their leave, Mr Bester remained seated in the public gallery and repeated his question about the legality of the new meeting.

Cr Nicholson refused to state under what section of the Local Government Act he was ordering Mr Bester to leave and repeated his demand that Mr Bester remove himself from the chamber. Mr Bester remarked that the mayor had not answered his question and then left the forum.

Valley Vision project officer Ian Brown was also present and was not asked to leave the gathering at the same time as the other members of the public.
Posted by Ed at 9:01 PM 6 comments: Links to this post 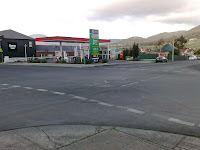 DOCUMENTS produced by Valley Vision to highlight the group's achievements include the information that a state-funded roundabout was due to be completed at a major New Norfolk traffic junction by June 2009.

The document titled "Capability Statement" is dated July 2009 and was sent to a local ratepayer on July 14 in response to questions asked of the Derwent Valley Council.

$100,000 was provided last year to the Derwent Valley Council via Valley Vision, for the construction of a roundabout at the busy junction of High and Stephen streets in New Norfolk. The money was provided from the State Government's "Safer Travel Speeds in Shared Urban Spaces" program on a dollar-for-dollar basis with the council.

As our photo shows, there is no roundabout at the junction and no indication of any preparatory work. The New Norfolk News invites Valley Vision's comment on its "magic roundabout".
Posted by Ed at 9:44 PM 3 comments: Links to this post

Bridge to be fixed by Christmas... next year

A CONTRACTOR has been appointed to repair the Bridgewater Bridge. Federal Infrastructure, Transport and Regional Development Minister Anthony Albanese last week said a $14 million upgrade of the historic bridge would be started in October by McConnell Dowell Constructors (Australia).

This news was welcomed by the Federal Member for Lyons, Dick Adams MHR, who said completion of the federally-funded project was expected around December 2010. "Once complete, the lifting system of the bridge will once again allow boats, yachts and the ferries to pass under the bridge," Mr Adams said.

Mr Adams said the Bridgewater Bridge project would support up to 80 jobs during the construction phase, with the potential for more jobs to be created in the Derwent Valley if tourism operators became involved in a greater use of the river.

State Infrastructure Minister Graeme Sturges asked motorists to be patient and careful when driving across the bridge during the works. “The bridge is part of the main North-South road and rail link and the work schedule has been designed to minimise disruption for road users,” Mr Sturges said. “Some inconvenience and lane closures will be unavoidable, but this is essential to ensure construction can be undertaken in a safe environment for both workers and motorists.”

Mr Albanese said planning was continuing for a future replacement for the Bridgewater Bridge.
Posted by Ed at 11:22 AM 2 comments: Links to this post

NEGOTIATIONS have started on a new "partnership agreement" between the State Government and the Derwent Valley Council. Lyons MHA and Speaker of the House of Assembly, Michael Polley, visited New Norfolk last Thursday to sign a "protocol arrangement" with Mayor Tony Nicholson. Mr Polley said he expected the new agreement would be completed by November, with a formal signing in December.

Mr Polley said the Derwent Valley Council was one of a growing number of councils around the state that had committed to negotiating a second partnership agreement. The protocol lists the issues to be considered during the negotiation of the second agreement. These issues include:

· a review of the council’s local tourism structure
· exploration of opportunities to increase the supply of affordable housing
· ongoing involvement in southern regional community recovery planning meetings and exercises
· using the "Communities for Children Project" to build community capability to support young children and their families
· Continued co-operation on the "Real Action Forward Thinking" program for youth development and community involvement
· A community safety strategy to promote economic, social and environmental wellbeing, in the Derwent Valley.

Mr Polley's media release made no comment on the state of the council-owned Willow Court historic site and whether that would be up for discussion in the partnership agreement negotiations.
Posted by Ed at 11:13 AM No comments: Links to this post

Nowhere to run to

THE Derwent Valley Council's management of the Willow Court historic site took a battering from all quarters last week, including all Tasmanian political parties and the state premier himself. Here are the highlights:

Tuesday, July 28: Greens MHA and former Derwent Valley mayor Tim Morris called on the council to open its books and reveal what has (and has not) been going on with the management of the site over the past six years. Read more here.

Wednesday, July 29: Liberal MHA Sue Napier said: "Some lateral thinking is needed to assist the Derwent Valley Council which simply does not have the financial resources to preserve and protect Willow Court, much less restore it."

Thursday, July 30: Premier David Bartlett said government funding for the site remained unspent and he urged the council to get its skates on. The ABC has the story.
Posted by Ed at 8:06 PM 4 comments: Links to this post