THE economy and the closure of the north-south rail line delivered a double blow to the Derwent Valley's major employer last week. Falling demand has forced Norske Skog's Boyer paper mill to wind back its production levels, and what paper it does produce must now be transported by road instead of rail.

General manager Rod Bender told ABC Radio that the mill - which normally produces about 5000 tonnes of newsprint each week - is aiming to reduce its stockpile over the next two months. Boyer manufactures about 40 per cent of Australia's newsprint requirements, supplying News Limited, Fairfax and West Australian Newspapers. Most newspapers are at present using less newsprint due to falling revenues during the present economic downturn.

Meanwhile, The Examiner reports that Norske Skog may seek compensation following the recent closure of the main line railway due to damage caused by a recent derailment. Boyer generally ships the majority of its product to the mainland via the ports of Burnie and Bell Bay (the Mercury newspaper's supplies are sent by road). In the absence of the daily rail movement, about 30 trucks a day are presently making their way north from Boyer via New Norfolk. Repairs to the rail line may take five weeks.
Posted by Ed at 5:16 PM 1 comment: Links to this post

Devastating daisy in the Derwent Valley 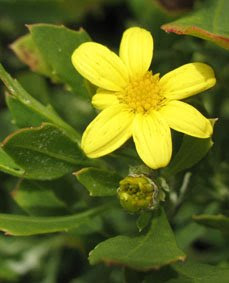 BONESEED (Chrysanthemoides monilifera) is one of the worst weeds in Australia - and it is growing in the Derwent Valley. A member of the daisy family and native to South Africa, boneseed was introduced to Australia as a garden ornamental. Now an environmental menace, boneseed threatens native bushland forming dense thickets that smother other plants.

Boneseed threatens more than 16 endangered plant species and communities, and many more are at risk if the spread continues. While altering habitat, boneseed also replaces native nectar plants important for bee-keeping, and reduces access to parks, coastal areas and trails. Surprisingly flammable, boneseed is also a fire hazard.

Boneseed is an erect, woody, evergreen shrub growing to 2-3m (sometimes taller). The leaves are fleshy and oval shaped with toothed edges. Boneseed flowers from spring to early summer with yellow daisy flowers of 4-8 petals. The fleshy fruits turn from green to black when mature and contain a single hard, seed that is bone coloured when dry. In one season a single boneseed plant can produce 50,000 seeds, which can be spread by birds, rabbits, livestock and other animals. Seeds also spread in water, soil and garden waste, and on vehicles and equipment.

Boneseed is a Declared weed in Tasmania under the Weed Management Act 1999 and property owners are required by law to control boneseed. During 2009, New Norfolk and the adjacent Derwent River is a target area that will be mapped and treated in partnership with Derwent Catchment NRM. Now is the time to report boneseed in your neighbourhood. Free treatment may be provided to local landowners requiring assistance and who are able to commit to ongoing follow up.

Local residents can help by checking their gardens and taking action. Report boneseed and help us control the spread by removing the plant safely and effectively. Learn more online about boneseed at www.weeds.org.au/WoNS/bitoubush or www.parks.tas.gov.au/factsheets/threats/boneseed.pdf

UPDATE: Boneseed has been found at a number of locations in New Norfolk including Tynwald Park, Peppermint Hill, Sharland Avenue and Glenora Rd. For more information about the eradication project, contact project officer Margie Jenkin on 6270 2242, or 0419 514 935 or mjenkin@stca.tas.gov.au
Posted by Ed at 7:43 PM No comments: Links to this post

WORK appears to have started on the demolition of historic buildings on the former Royal Derwent Hospital site. Blogger Jarvo-325 reports that part of Ward 7 was knocked down over the weekend and his inquiries to the Tasmanian Heritage Council revealed that an appeal to the Resource Management and Planning Appeals Tribunal had overturned the heritage listing which had protected the building until recently. Read more at the Willow Court and Royal Derwent blog, which also has pictures of the destruction.
Posted by Ed at 10:24 PM 7 comments: Links to this post

TEN self-described ordinary people of the Derwent Valley were arrested and charged with trespass following an anti-forestry demonstration in the Florentine on Sunday. Spokeswoman Bronwyn Smith said "sheer desperation" over a lack of government leadership and answers about the true extent of the protection of the Upper Florentine led to the local people being arrested - nine of them for the first time in their lives.

The group, which is believed to include people from New Norfolk, Granton, Westerway, Bushy Park and Ellendale, joined a protest march that drew about 300 people to the forest on Sunday. In total 22 people were arrested for breaching a forestry exclusion zone and that group is now calling itself the "Mothers Day 22".

FEDERAL funding of $2 million will pay for the refurbishment of New Norfolk Primary School's multi-purpose hall, library and learning areas. Built about 20 years ago, the hall can no longer accommodate whole-school assemblies following recent increases in enrolment.

The funding was announced last week by Premier David Bartlett and deputy prime minister Julia Gillard. Some 51 Tasmanian schools were named as beneficiaries of round one of "Primary Schools for the 21st Century", part of the Federal Government's $14.7 billion "education revolution".

For New Norfolk Primary, this latest fillip comes at the same time as a $2.5 million upgrade is under way, funded by the State Government. The total package will give one of Tasmania's oldest schools a 21st century smile. Other Derwent Valley schools are expected to benefit from subsequent funding rounds.
Posted by Ed at 9:10 PM No comments: Links to this post

Letter to the editor: Road rage

My family and i have recently been subjected to two counts of road rage on the normally quiet and pleasant roads of Molesworth. What is it that possesses some drivers to act so aggressively towards other drivers? Particularly in a scenic area with narrow roads where a lot of families live and there is an abundance of wildlife?

I wonder what type of people they are, how unhappy they must be in their lives, and hope they do not act in such a manner to their loved ones as they do to complete strangers from the safety of their vehicles.

My comment simply is, relax, be an alert driver not an impatient one, forgive others drivers indiscretions if they are a little slower than you or you dont feel they were over to the left enough, and put a smile on your face behind the wheel. That other driver does not leave home intending to upset you, they dont even know you, all that aggression is all in your mind.

Be happy and we all might enjoy our driving a little more.

Posted by Ed at 8:50 PM No comments: Links to this post

Mayor for a minute

IN a cheeky moment at last month's Derwent Valley Council meeting, local government agitator Damian Bester advised the municipal body that he would not be able to attend the May meeting. "I know you will be disappointed to hear this," Mr Bester said.

Later in the meeting, when Mayor Tony Nicholson called for any applications for leave, several councillors humorously responded "Just Councillor Bester," but a lone councillor at the far end of the table added sotto voce "Mayor Bester".

NOTE: Damian Bester has asked the NNNews to advise its readers that he will not be standing for mayor at this year's council election.
Posted by Ed at 10:59 PM 2 comments: Links to this post 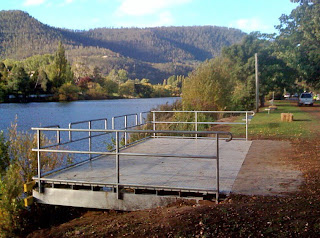 TASMANIA'S most scenic fishing platform seems to have been erected on the Derwent Esplanade at New Norfolk with little fanfare. Designed to provide safe access to the river for people with disabilities, the project was an initiative of Valley Vision and took less than three years to complete. Funding of up to $25,850 was provided by the Federal Government in 2007.
Posted by Ed at 10:31 PM No comments: Links to this post

Show us the maps

AS police descended on a protestors camp in the Florentine forest deep in the Derwent Valley this morning, a more local group of activitists was raising questions about the often-stated protection of 90 per cent of the Upper Florentine. Long-term Derwent Valley resident Bron Smith released correspondence which calls into question the method used for determining the protected areas.

"We are disgusted and angered that Forestry Tasmania right now, with the help of the Tasmanian Police, is logging the heart out of the Upper Florentine, whilst the Tasmanian community still has not been shown the promised 90% of this magnificent forest that apparently will be saved," Ms Smith said.

"Forestry Tasmania stated on 13th of January 2009 that '90% of the Upper Florentine catchment is not available for forest harvesting,' and since then state and federal politicians has been repeating this figure as a fact," Ms Smith said.

"We have tried for months to obtain proof of this figure of 90%, and finally in March received a letter from Forest Minister David Llewellyn admitting that 'there is no map available which shows the precise boundaries that comprise the 90% that they [Forestry Tasmania] estimate will never be harvested,' and that 'actual location and extent cannot be mapped until more detailed pre-harvest planning has been completed'."

"How can Forestry Tasmania claim on the one hand that 90% of the Upper Florentine is unavailable for logging, while the Forest Minister on the other hand admits that it's only an estimate and they don't actually even know the location or the extent until they do more planning? The claim of 90% is utterly arbitrary. This claim cannot be substantiated. There is no proof to this claim, but this hasn't stopped both our state and federal government from asserting it as a fact."

"We have had enough - we demand that logging stops immediately and that the Government shows us this supposed 90% of the Upper Florentine that is not available for logging. We have written to all Members of Parliament with suggestions of how the Upper Derwent can benefit in the long term by keeping these unique forests intact, including many ideas involving tourism potential."

"These forests belong to the Tasmanian people, and Forestry Tasmania and our politicians should give us precise details of plans for its use, rather than hide behind spin," Bron Smith said.
Posted by Ed at 10:16 PM No comments: Links to this post