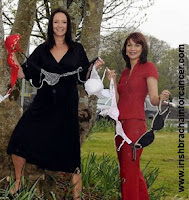 SORTING through my late Mum's clothing the other day and having a bit of a chuckle about the very expensive and brand new "do up the front" bras I bought for her earlier this year, I was wondering what to do with them. There were some hardly worn other bras, all in perfectly good condition and I thought perhaps I'd phone Capri and ask them if they had a "recycling" programme. I was listening to ABC Radio the next morning when blow me down if a chap from Bundaberg in Queensland wasn't requesting ladies to send in bras to support a breast cancer project for the McGrath Foundation.

So I got online and read all about it www.citizenswhocare.com.au and that was the answ

er! The group's effort to break the record of number of bras strung together in 2009 and their plan to then send them off to PNG, Fiji and so on is admirable, so not only did I send Mum's off, I cleaned out my old good (and not so darned good) bras as well and sent them all off to:
CWC
PO Box 7084
Bundaberg North QLD 4670

Mind you, I did send a covering letter to say they were welcome to get rid of the "not so good" once they'd broken the record! Why not have a clean-out yourself for this good cause - it's amazing just how many you can stuff in an Australia Post parcel bag. And my Mum would've loved the idea!
NGAIRE GLOVER
* THANKS to Ngaire for sharing her news about this worthwhile event. What can YOU share with the New Norfolk News?
Posted by Ed at 9:41 PM No comments: Links to this post

ONE of the Derwent Valley Council's most important committees seems to have gone missing. In response to public questions at the August and September council meetings, general manager Stephen Mackey has been unable to say where the minutes of the Willow Court Special Committee are held, where the public may read them, and when the committee's elections are held.

During public question time at the September meeting, Mr Mackey said he would seek the information from Valley Vision project officer Ian Brown.

The committee oversees the council's efforts to redevelop the Willow Court historic site at New Norfolk. Mr Brown is known to provide occasional briefings to the council, but these are conducted behind closed doors.
Posted by Ed at 10:21 PM 1 comment: Links to this post 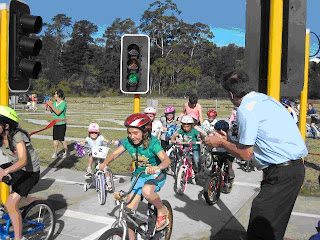 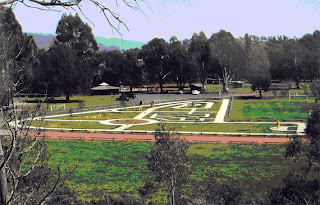 A CHILDREN'S road safety track in New Norfolk has been awarded by the Heart Foundation in recognition of its effectiveness in promoting health and fitness. News of the award was revealed by Mayor Tony Nicholson at last week's Derwent Valley Council meeting.

Simulating real-work traffic conditions, the Tynwald Park bike track was opened in November 2007 and has been a popular feature of the busy recreational area. The facility was developed by the council in conjunction with supporters and sponsors including Norske Skog Boyer, Timber Communities Australia, New Norfolk Lions Club, Tasmanian Community Fund and the Federal Government. The design was developed by local children's road safety advocate Maree Pinnell.

"I have nothing further to add" 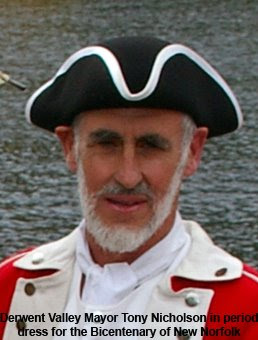 DERWENT Valley mayor Tony Nicholson has refused to address the mounting evidence that there has been no published statement about the re-appointment of the council's general manager.

"I have nothing further to add," Councillor Nicholson said during public question time at the council meeting held on September 18, in response to a question from the New Norfolk NewsBlogger. With no evidence that any statement had been published or broadcast, the NNNewsBlogger had asked the mayor whether he would like to take the opportunity presented by the council meeting to make an announcement about the general manager's reappointment.

The issue has simmered since February, when the mayor announced the search for a new general manager, telling the Derwent Valley Gazette that this was a legislative requirement. The existing general manager was welcome to apply, Cr Nicholson said at the time. But with no job advertisement being published in the intervening months, the public began to question the process but the council maintained its silence.

The matter exploded at the budget meeting on June 26, when deputy mayor Scott Shaw refused to vote for the council's annual plan because he believed the council was not being open with the public, particularly in relation to the reappointment of the general manager. He was supported by Cr Richard Parker who said it had been two months since the general manager was reappointed and yet there had been no public announcement. The July 2 issue of the Derwent Valley Gazette reported the mayor saying that a statement would be made "soon".

The NNNewsBlogger attended a community forum at Granton in August and asked when the council would announce the appointment of a general manager. Cr Nicholson said he had already made his statement and it had been published in the press. All other councillors present remained silent, with the exception of Cr Jim Elliott, who agreed that he had seen the newspaper article referred to.

In an email to the NNNewsBlogger, Cr Nicholson later said his statement had been made to the ABC, not the print media. Despite this, Cr Elliott maintained that he had seen the item in the Gazette. When clarification on this matter was sought at the September 18 council meeting, Cr Nicholson confirmed that his statement had been made to reporter Charles Waterhouse and broadcast on the ABC. When informed that Mr Waterhouse was a journalist with the Mercury newspaper and not the ABC, the mayor said he may have got the reporter's name wrong. He maintained that he had been called by the ABC, but had not heard the broadcast himself.

The NNNewsBlogger said a search of the ABC news website had not turned up the mayor's statement, and, as the mayor had not heard the broadcast himself, perhaps he would like to make his announcement to the meeting in progress. "I have nothing further to add," Cr Nicholson said.
Posted by Ed at 8:16 PM 2 comments: Links to this post

Pats on the back for student enterprise 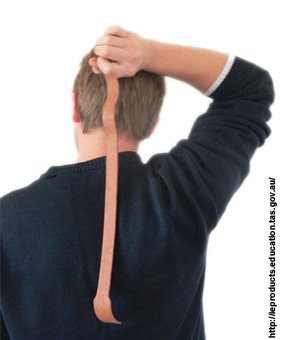 WOODEN back-scratchers manufactured by New Norfolk High School pupils are one of the two most popular products of a internet-based student enterprise aimed at addressing the state's skills shortage.

Funded by the Education Department, Inter-High Enterprises manufactures and markets timber products such as pens, jewellery, boxes, clocks, timber tongs and back-scratchers. The most popular items are the timber tongs made by Campbell Town students and the New Norfolk-made back-scratchers.

Through this project, students have the opportunity to experience all aspects of business management, product design and marketing, while honing their skills in design and manufacture.
http://ieproducts.education.tas.gov.au
Posted by Ed at 11:15 AM No comments: Links to this post 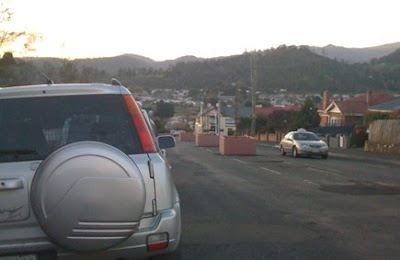 THE Derwent Valley Council has pushed ahead with its controversial traffic management plan for busy Burnett St, New Norfolk, despite widespread opposition.

Described by the Derwent Valley Gazette as being part of a $750,000 "mainstreet makeover" (August 20, 2008), the project has seen the dividing of the road and the installation of large concrete planter boxes down the middle.

Opponents say the street is not wide enough to cope with the modifications, especially as it is a busy bus and truck route. Complaints to the council have seen the plan modified, with two planter boxes removed from the section of Burnett St between Pioneer Ave and High St. After a two-week hiatus, the remaining boxes were installed on September 2.

Described as "pots" by the council, these square-shaped pink concrete boxes hold ornamental pear trees and have been placed at intervals along the length of Burnett St from George St to the Lyell Highway (Montagu St). The plan calls for "smaller pots" to be installed in adjacent High St and Charles St.
Posted by Ed at 6:42 PM 2 comments: Links to this post

STUDENTS at several local schools will benefit from a State Government injection of $32 million aimed at boosting literacy levels across the state. Premier David Bartlett made the announcement while visiting Fairview Primary School on August 13.
"We need to raise the bar on key measures of student literacy and numeracy and also close the gap between our high and low achievers," Mr Bartlett said. "Through this initiative we've allocated $32 million over four years to significantly increase the number of students finishing their primary education with the necessary basic literacy and numeracy skills and for all children to achieve higher literacy levels."
Fairview Primary and New Norfolk Primary are among 26 schools to benefit from additional teachers to work directly with students, additional professional learning for teachers and more specialist staff.

Posted by Ed at 6:26 PM No comments: Links to this post